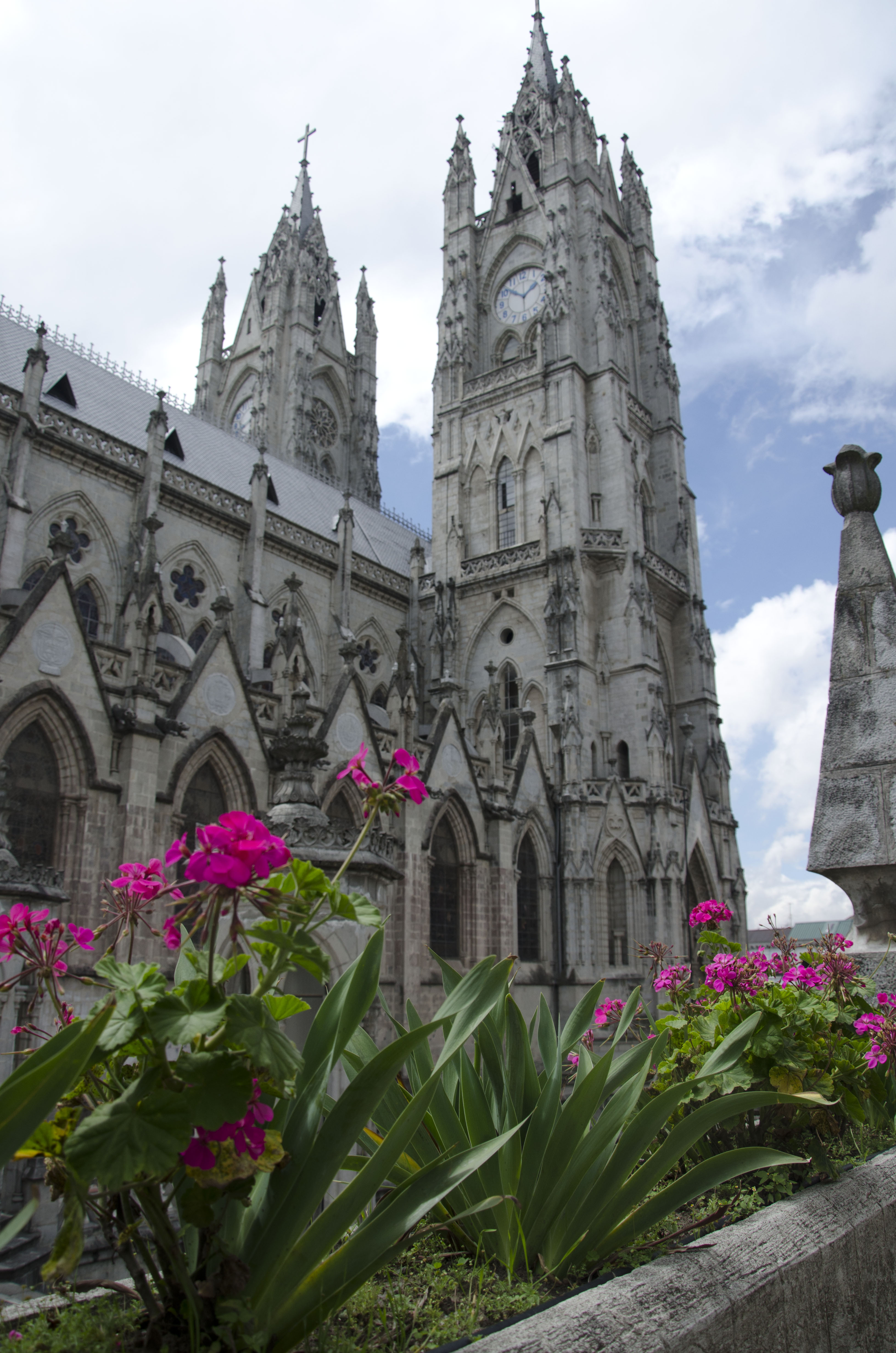 A view of the church from nearby steps.

Although this Basilica looks as if it has spent centuries in downtown Quito, it is relatively new. Approval for construction came in 1884 and it wasn’t until 1985, more than a hundred years later, that the Basilica blessed by Pope John Paul II yet the building is still officially unfinished. Rumor has it when the building is completed that the end of the world is nigh. There are several empty niches waiting for carved statues and several of the chapels feel very empty. Like most Gothic Cathedrals, the work is probably never really finished as by the time the work is supposedly complete, something is needing repair. We saw examples of this even in this extremely newer building, grotesques that were beginning to crumble on the outside walls.

The Basilica is a focal point for the city and can be seen from many vantage points as you explore other locations. It’s well worth a visit on its own and at the low cost of a $1 per person, very affordable as well. You can take photos in a majority of the church. Don’t forget to look for the turtles, the llamas, the iguanas and more groteques on the outside of the building and keep your eyes open for examples of artwork that blend indigenous culture with Catholic tradition.

We plan on heading back on a sunny day so that we can take advantage of the climb up the towers which will grant us a view of the city and the mountains that surround it.

If you would prefer to view these photos in a slide show, feel free to click on your favorite and then the slideshow will begin!

The outside stonework including the groteques, all in the images of animals from Ecuador.

Statues adorn many of the niches though the Cathedral is still considered unfinished.

An intricately carved door opened to allow light into the entryway.

Morning light inside the Basilica.

One of the aisles showing the Stations of the Cross.

Stained glass windows adorn every nook and cranny, even up high.

A peek into the original chapel. All of the decor on the walls is handpainted stone that originates from Pinchincha, the nearby volcano that guards Quito.

An example of a native grotesque – llamas leaping form the sides of the Basilica.

A view of the church from nearby steps.

Several of the side chapels have images of the Virgin Mary.

Angie is a freelance writer and photographer who can't get enough of South America. The lesser-known the destination, the more she wants to go. She currently lives in Portland, Oregon and makes frequent trips to Ecuador.

The Workshop of Pablo Cordero

When you click on some links, we may earn a small commission through affiliate marketing. That  click helps us pay to operate our website. We hope you chose to click often! For more information, please visit Our Affiliate Connections.