The Virgin’s Grotto near Nono, Ecuador

While driving a backroad connecting the small town of Nono with the nature reserves in the Tandayapa Valley and Mindo, we found a surprising sight. Jutting out into the road on a sharp bend was a set of concrete stairs leading up a rock face. A pull-out across the way helped convinced us to stop. So we parked and climbed up to a small, enclosed space at the top of the stairs. We had found the Grotto of the Virgin of Alambí.

A Likely History of the Grotto

This place held an aura that spoke of a long history.

A freshwater spring seeped from the rocks and it is likely that, in ancient times, indigenous residents came to collect water and perhaps take ritual baths during each of the four Raymi celebrations. High up on the rock face, a gap that is not quite a cavern invites people to climb up and explore. It is easy to imagine this small grotto as a place of sacred importance for the tribes who left their mark on this land, like the Yumbo who built a transportation network of culuncos connecting Quito with the Pacific Coast.

Throughout South America, it is common to find places with an ancient spiritual connection converted into modern day shrines venerating Catholic saints.

Recent legend has it that an image of the Virgin Mary appeared as a shadow within the crevice where the modern day shrine has been built. On the other hand, some say that an actual painting appeared while others believe that a local artist enhanced the image, painting his version of the apparition on the dark gray stone. Either way, the painting that exists today is a beautiful example of Ecuadorian folk art, worthy of a visit all its own.

What is agreed upon is that the Virgin appeared in 1964, sparking a new tradition for the people of Nono, an annual pilgrimage. Today, Nono celebrates the Virgin of Alambí for an entire month, holding many events including a procession from the town to the shrine in the grotto during the month of August.

An Excellent Example of Religous Art

Like many images of the Virgin Mary in Ecuador, the Virgin of Alambí stands on a crescent moon, tying her to the symbol of the Woman of the Apocalypse. She wears a robe of blue and a dress of light red. She holds the baby Jesus in her right arm while her left hangs down by her side, palm open. Her hair is a blend of dark chocolate with hints of warm red and glinting gold. Her long tresses fade into the natural color of the rock face itself. Additionally, the artist has meticulously detailed her dark brown eyes. Set in a face painted shades darker than the pale white of baby Jesus, they gaze into the distance, leaving visitors to wonder if she sees them at all.

Possibly, the Virgin of Alambí sees the surrounding countryside, a land dotted with cow pastures amidst primary cloud forest. This land begs to be protected and we can only hope that the Virgin’s view of these beautiful mountains remains lightly touched by the impact of additional development.

Information For Your Trip

Angie is a freelance writer and photographer who can't get enough of South America. The lesser-known the destination, the more she wants to visit. She currently lives in Portland, Oregon and dreams of her next trip to Ecuador. 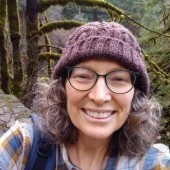 Angie is a freelance writer and photographer who can't get enough of South America. The lesser-known the destination, the more she wants to visit. She currently lives in Portland, Oregon and dreams of her next trip to Ecuador.

The Best Birding Around Papallacta, Ecuador

A Museum for Quito’s Patron Saint